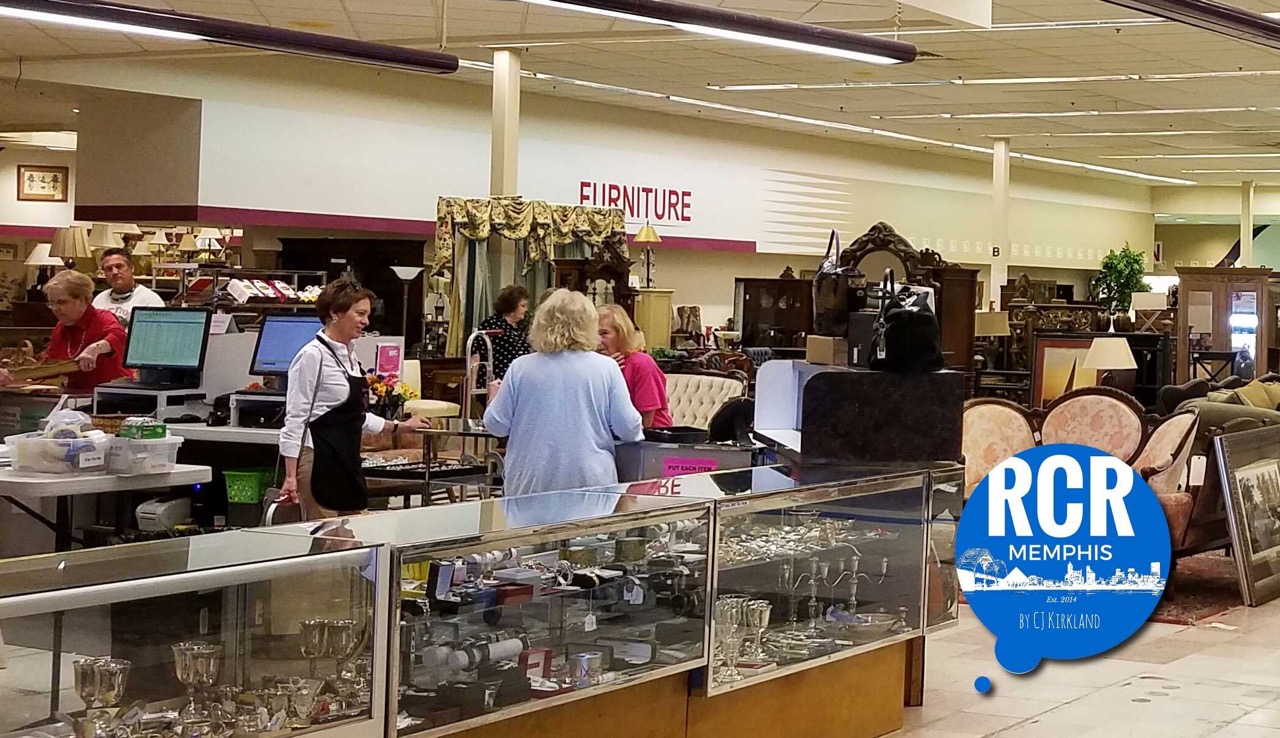 In preparation for my meeting with members of Les Passees to discuss the organization’s annual fundraiser, the Stock Exchange, I was directed to this year’s “storefront” in Bartlett. Storefront, in this case, is worth enclosing in quotation marks because after arriving I learn that the Stock Exchange is actually 55,000 square feet of space- and every inch of space has been donated. Joyce Carter, president of Les Passees (Memphis’ oldest non-profit women’s organization), enthusiastically greets me at the front entrance and her excitement in describing how their largest fundraiser comes together to give back is both sincere and contagious. Joyce sets the tone for the remainder of my visit during which I walk all 55,000 square feet with member volunteers Mimi Garrison and Jane Harris, listening to stories about lives that have been equally blessed whether they were on the giving or receiving end of the Stock Exchange’s consigned goods.

“It is a mission of love and takes a village,” explains Joyce before she leaves, en route to the organization’s headquarters. Though I’ve heard her words they don’t fully take root until Mimi and Jane explain the depth of commitment that goes into the Stock Exchange, now in its thirtieth year. Every fall over 7000 volunteer hours are logged by Les Passees members whose work spans approximately ten weeks, always aiming to make the current year’s fundraising project even more successful than the last. Each consigned item is labeled, methodically placed on the showroom floor and included in online lists so consigners can track their sales. Vignettes are repeatedly redesigned by Les Passees members, some working late into the night, so that on subsequent days shoppers can see new ways of looking at the same things. It is a creative gift that helps not only us, the shoppers, but also those ultimately benefitting from all of the sales’ net proceeds: the Harwood Center preschool and puppet troupe Les Passees Kids on The Block (more on these beneficiaries later.)

As we walk past the area where children’s items are displayed for sale, Jane mentions that though her recent surgery has limited her ability to lift heavy items, she has found other ways to help during her almost-daily shifts at the Stock Exchange. I am shown one of the many items she has labeled, one of many that has been brought in by a benefactor, retailer, craftsman or antique dealer who believes in the mission of which Joyce spoke. This space, I’ve realized, is a unique meeting place for people whose paths may never have crossed if it weren’t for the collective effort made to give back- by both Les Passees and the individual consigners involved. And while there are those who walk through the Stock Exchange doors with the sole purpose of consigning or purchasing unique items for their unique dwellings such as a hunting cabin in Mississippi or an antebellum home in Arkansas, they sometimes find their purpose unexpectedly altered.

I’m told of one occasion when a gentleman was searching for a bed that could fit in his small apartment. He was very limited with both space and budget but the Les Passees member who was assisting him would not give up on finding exactly what he needed. Just as they both walked to the rear of the store where new items are brought in, a consigner was unloading a sofa bed. The gentleman was immediately drawn to the item but the accompanying price tag made it out of reach. Without hesitation, the consigner instructed the member volunteer to give the sofa bed to the gentleman. “Give, not sell to,” Jane recollects. There have been many occurrences such as this over the years she and Mimi explain but are rarely, if ever, publicized. They are not done to attract attention or praise but because doing so is part of the very moral fiber of so many Les Passees members.

The good that is generated by the Stock Exchange is so far-reaching it is stirring when contemplated. On a micro level shoppers can find rare items to gift others with, such as the vintage Yoda doll I found for my Star Wars-obsessed son. Or, in filling 55,000 square feet that previously sat empty, consider the impact on sales of surrounding stores who see increased foot traffic from those familiar with the pop-up consignment shop but not necessarily with the businesses that anchor it- until now. On a macro level, proceeds benefiting the aforementioned Harwood Center and Les Passees Kids on the Move are helping Memphis-area children and families by providing necessary, therapeutic care at little or no cost and equipping them to learn and function at their very best. At the Harwood Center children with developmental disabilities are exposed to the early intervention needed to develop social, language and self help skills. Here the children thrive in a setting that better prepares them for life environments when they exit the program after age 5. The Les Passees Kids on the Move puppet troupe, which is 100% funded by the organization, travels to schools throughout the area and uses child-size puppets to help children express their feelings, sometimes fears, about anything ranging from self-esteem to bullying to drug and alcohol use to accepting each other’s differences. Whether it is the purchase of a $12 toy or a $12,500 collectible, every dollar raised by the Stock Exchange is making a difference in someone’s life.

This year we have until October 30th to help Les Passees continue in making that difference.

Go. Shop. Give. Because as Joyce said, it takes a village.