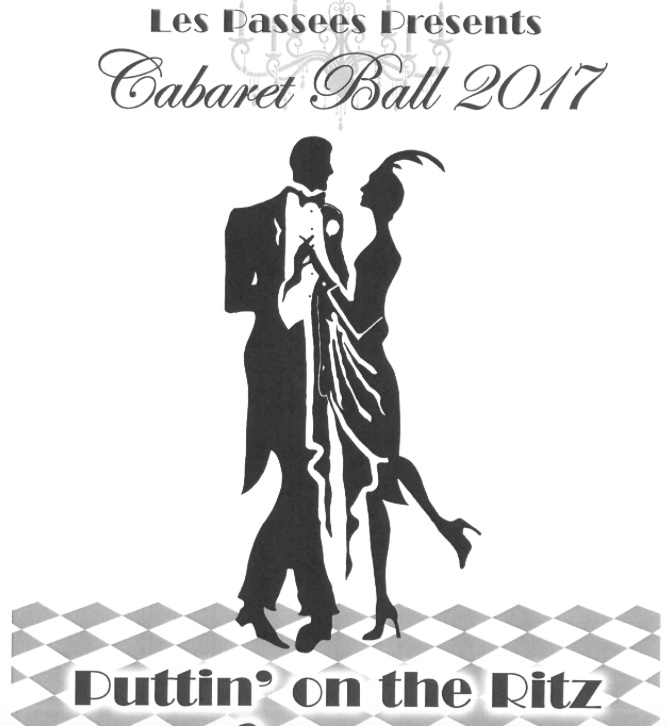 There are several sections of sidewalk along East Parkway that are cracked and broken. It was only recently that I learned part of the reason for this is that massive tree roots have spread so widely, and are so strong, they are breaking through the concrete. When looking at trees I rarely think of their roots, to be honest. I focus primarily on the beauty of what is actually in plain sight: the fruit and the leaves that so enhance our city’s landscape. But it is the root system of these trees that anchors and feeds the parts of it I see and admire. Likewise, Les Passees is an organization whose roots run far, wide, and deep and the resulting growth and fruit thereof can be found in just about every facet or our city’s framework.

Formed in 1919, the “primary purpose was to do charity work in the community” and still today Les Passees operates year-round raising funds to champion this purpose. Two of its most well-known fundraisers are the annual Stock Exchange and Cabaret Ball. The Stock Exchange, begun in 1986, typically takes place in the fall, as it did this past September and October. The Cabaret Ball, begun in 1928, is traditionally held at the beginning of the year and is scheduled for tomorrow, Saturday, January 21. Joyce Carter, current president of Les Passees, explains that the Cabaret is not only a fundraiser but also a celebration that highlights the organization’s accomplishments, honors its sponsors and thanks the many women who have given so much during the past 364 days. One of those women, Mimi Garrison, shared with me how life-enriching her experience has been with Les Passees and how the Cabaret Ball epitomizes what it means for members of a community to give back.

Before moving to Memphis, Mimi spent seventeen years working with children in community-based and after-school care programs. When she and her husband were relocated here for work, one of the first things on her agenda was to find a way to “give back to the community in which I now belonged.” She spoke with a friend and fellow member of Kiwanis International who knew her heart was in helping children and recommended she look into Les Passees. Mimi became involved last year and will celebrate her first full year at the end of March 2017. She is slated to become a Sponsorship Chair in 2017/2018 and looks forward with anticipation to her first assignment on the Board of Managers.

Each year the Cabaret acknowledges corporate and business sponsors through “Living Ads”: young women who are members’ daughters and granddaughters and are tasked with representing the sponsors at the event. This year, Mimi’s daughter is participating as one of the “Living Ads,” thus continuing on and embracing the path of service she has watched her mother be part of in so many of her charitable endeavors. Mimi recalls running the benevolence program at her church and taking her daughter with her when she visited families in need, whether that need was food for the week or a shoulder on which to lean during a difficult life circumstance. (Our roles are) “not to just give but to boost up,” she says. It is in this mother-daughter collaboration for the Cabaret that we can see the resulting fruit from a tree rooted in charity, grown from seeds planted long ago. Similar seeds were planted in the life of one of Memphis’ most prominent businessmen who this year joins many others as a sponsor of the Cabaret. He did so because, as he told Mimi, his mother was a member of Les Passees and he observed a life of philanthropy through the lens of her doing and giving with the organization.

For a tree seed to grow it needs two things: light and space. As I meet and speak with another member of Les Passees, Merri Curry, I understand that in a most basic analogy, those roots we’ve found to have spread throughout our city exist because these women have provided the light while the organization has provided the space. A light in the sense that they have taken what is in their hearts and translated it into something tangible that illuminates the lives of others. Their roots of giving have broken concrete blocks of shame and low self-esteem through Kids on the Block, the puppetry show with child-sized puppets that travels to schools throughout Memphis and helps over 25,000 students each year understand what it’s like to live with a disability, or be bullied, or be faced with the perils of alcohol and drug use. Their roots of altruism have broken concrete slabs of potential setbacks for families whose children have developmental disabilities through support of the Harwood Center. At Harwood these children, ages eighteen months to five years old, are taught in a therapeutic and stimulating environment so they can “make strides toward important life milestones.”  Merri gets emotional while talking about the work they have done with Harwood, thinking aloud, “that could be my child.” And speaking of children…

Les Passees members are mothers and grandmothers. They are full-time moms and career women-Merri has two children and two jobs: running her interior design firm and family estate sales company. She shares that members are from all walks of life, all ages, races, and economic backgrounds. They have joined the organization as individuals but soon build friendships and form great bonds over their common passion of helping others. And their passion is contagious within the Memphis community, prompting local businesses to also take part in celebrating the donors and corporate sponsors who, from the year’s start, have aided the organization’s efforts. For example, Kendra Scott has donated jewelry to each of the young ladies who are “Living Ads” this year. Joyce emphasizes that the organization never stops fundraising and over the course of any given year there are countless businesses that commit to the mission of Les Passees and make it possible for them to continue serving the children and families of Memphis.

Yes, its roots run wide and its charitable work has borne fruit in many ways. Thus, Saturday night’s Cabaret is a celebration, indeed. It is a celebration acknowledging women who, like Merri, ask the question year in, year out, “how can I serve?” It is a celebration of the sponsors who believe in and support Memphis’ oldest non-profit women’s organization. But I believe, above all, it is a celebration of the seeds being planted generation after generation that grow to sow love and compassion into the lives of countless children and families who, themselves, are worth celebrating for the courage and resilience they demonstrate on a daily basis, despite the difficult circumstances surrounding them.

This year’s Cabaret theme Puttin’ On the Ritz is a reflection of the era in which Les Passees was formed and its location, Hardin Hall at the Memphis Botanic Garden, is a reflection of how much the organization meant to one of its benefactors: Mrs. Helen Hardin. The event will include an Auction and Wine Pull, with 100% of the proceeds from both benefiting the organization’s efforts in the community. We can all definitely celebrate that!

This is part two of a four-part series highlighting Memphis’ oldest, non-profit women’s organization, Les Passees. In the first two parts, we take a look at the organization’s activities, fundraising efforts and member involvement. In the remaining parts three and four, we’ll look at the people and places being so greatly impacted by these efforts.

For more information about the organization, please visit www.lpmemphis.org